The Linguistic Profile of Romeyka

Romeyka presents the linguist with several interesting properties that are not found in other varieties of Greek. Though it is true that Turkish has influenced Romeyka, for instance in the word order, strikingly, some properties cannot be explained by language contact. As such, they must be treated as either internally motivated changes or as retentions from an earlier stage of the Greek language, which may, however, be subject to further internal change.

A selection of these interesting properties in the Romeyka of Of (Çaykara) include the following: infinitives, negators, double-object constructions, and multiple wh-fronting. The list is by no means exhaustive, but rather reflects the progress of the project in understanding the various aspects of the Romeyka grammar.

One of the sharpest changes in the evolution of Greek is the loss of the infinitive (Joseph 1978), and its subsequent replacement by na-clauses. 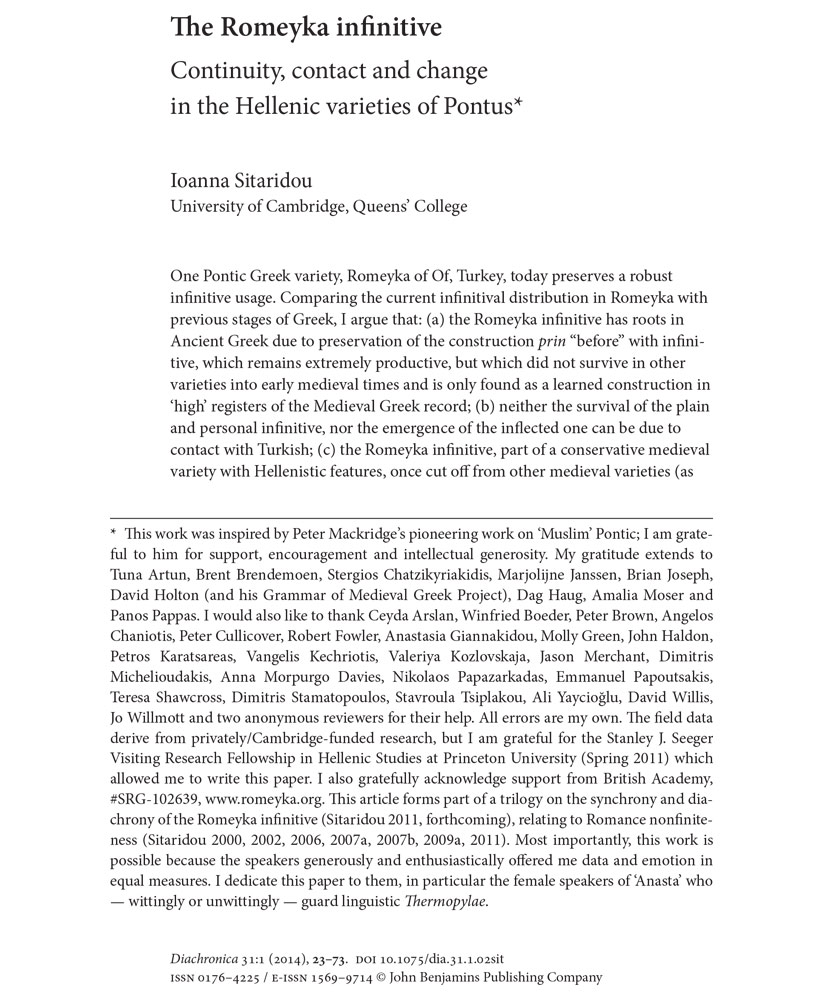 Infinitival complements were gradually replaced by hina-clauses which later became na-clauses. Infinitival loss has its origins in Hellenistic Greek (New Testament Greek, in particular), as the competing structures in (3) show:

Against this background of the almost total eclipse of the infinitive from the Greek language, consider infinitival retention in Romeyka (4) and the similarity to (1):

4. Prin pisini fain, prin spudžisini so mandrin tši pao. (Romeyka)
before make.INF food before clean.INF at.the barn not go.1SG
“Before I cook and before I’ve cleaned the barn, I am not going.”
Interestingly, Pontic Greek today (5) does not allow for an infinitive and, therefore, aligns with Modern Greek (2):

5. prin na mairevo so mandrin ki pao. (Pontic Greek)
before PRT.SUBJ cook.1SG to.the barn not go.1SG
“Before I cook I am not going to the barn.”

Although infinitives survive into Medieval Greek, infinitive in before-clauses are only found as learned borrowings and are register-specific:

However, although in continuous use since Hellenistic times, the Romeyka infinitive has undergone two significant changes:

a. the syntactic distribution of the infinitive as a complement in Romeyka shows restriction to the most monoclausal domain, namely as a complement to nonveridical verbs, the prototypical licensing context for the infinitive. This is also typical of the infinitive’s distribution in Medieval Greek.
b. The infinitive was reanalysed as a negative polarity item; that is, it came to operate under a rather constrained use, which appears to be tied to the degrees to which a proposition assumes, or rather does not assume, its own truth value. This is a development unique to Romeyka.

Romeyka differs from Modern Greek (and other Pontic Greek varieties to a lesser degree) with respect to negation in many ways: 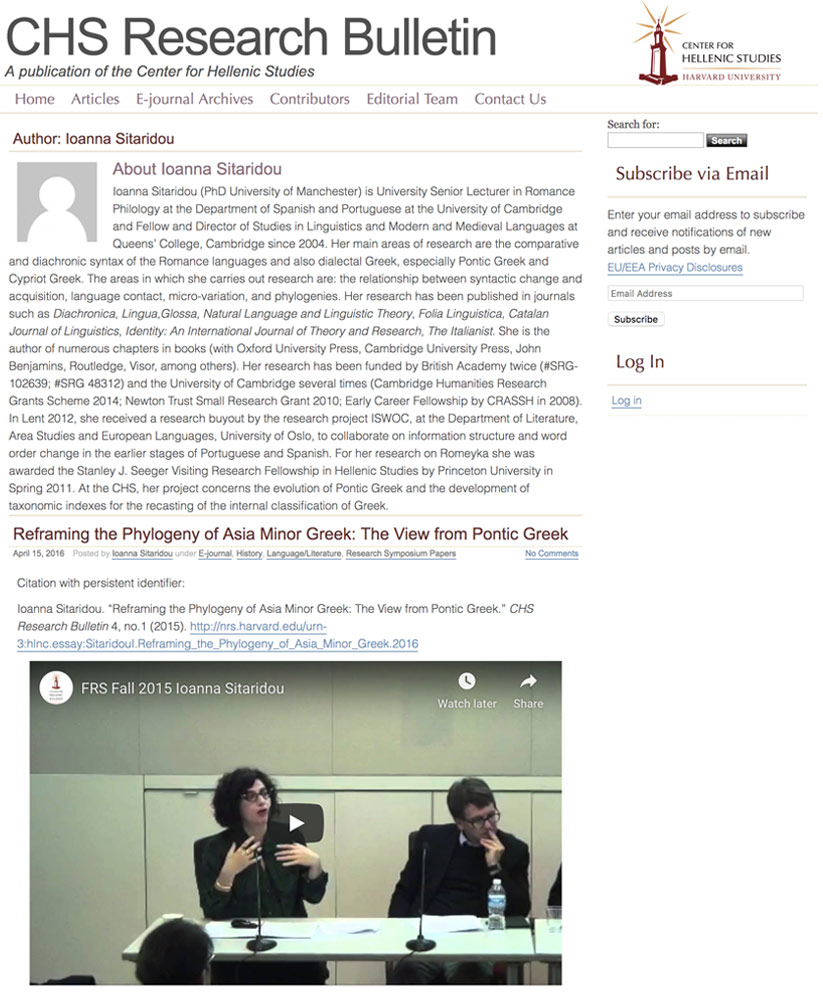 In Romeyka indirect object (IO) determiner phrases (DPs) are: (i) accusative like the direct object (DO) DPs ones (1a), whereas in Standard Modern Greek they are genitive (1d); and (ii) do not alternate with prepositional phrases (1b), unlike Pontic Greek (1c) and Modern Greek (1d): 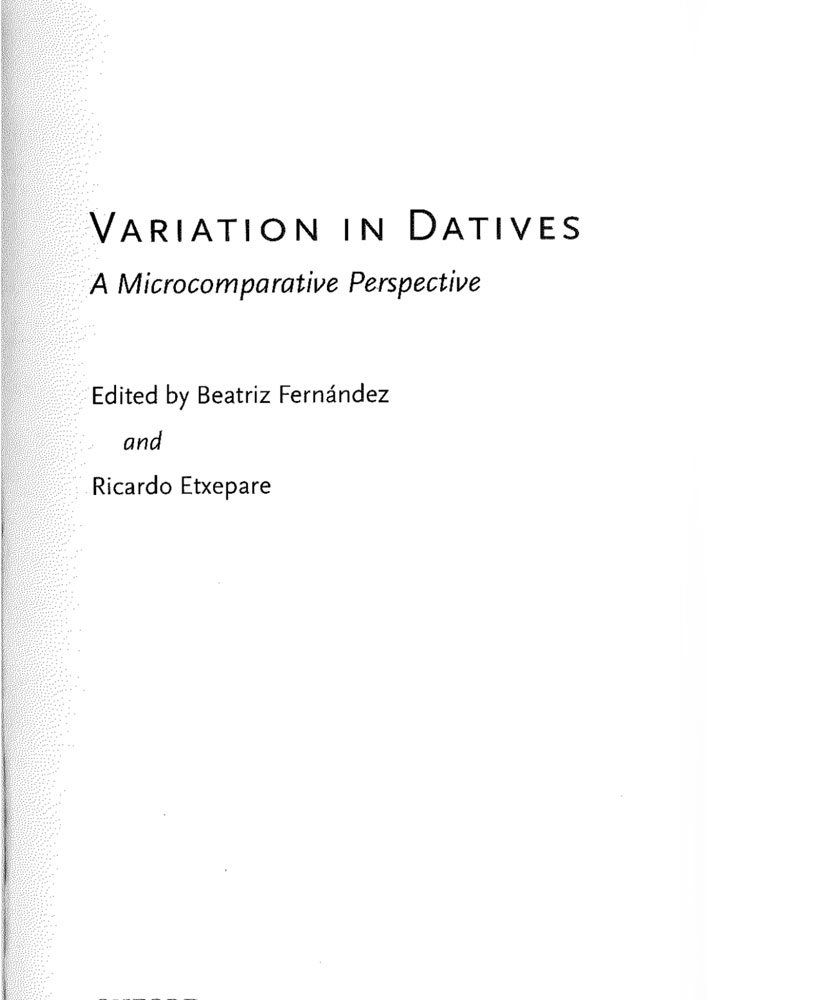 In Romeyka, both surface orders (IO-DO and DO-IO) are licit, despite the morphological homonymy, although the most common order in our data was DO-V-IO:

These data are rather important because it seems that the underlying order in double order constructions is DO>>IO which then makes German not the only language having this underlying order (see Müller 1995, McGinnis 1999). In fact, the situation seems to be the same in some diachronic varieties of Greek as well, notably Medieval Cypriot Greek (as well as Hellenistic Greek; see Michelioudakis 2010b, 2011). This constitutes a serious challenge for the validity of any cross-linguistic generalization whereby IO DPs always merge higher than DOs.

It is well known that Standard Modern Greek does not allow multiple wh-fronting. However, Romeyka seems to exhibit Superiority effects, which show that multiple wh-fronting is strictly order-preserving, as in Bulgarian, albeit not otherwise identical. 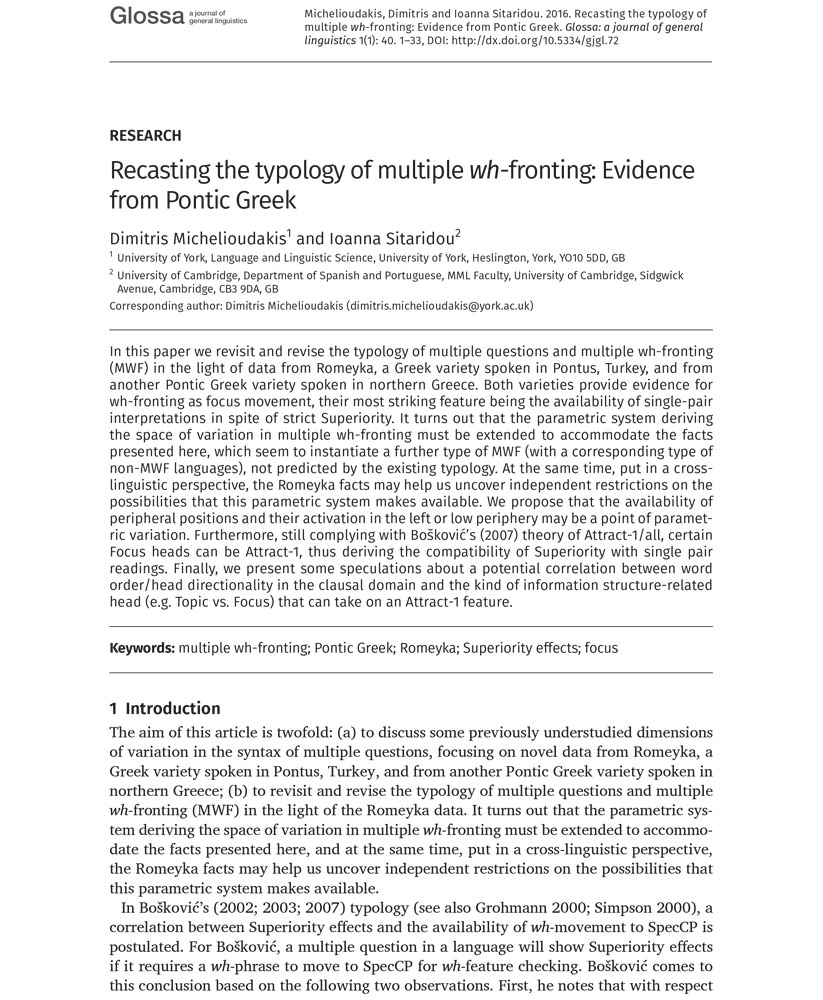 It is well known that Standard Modern Greek does not allow multiple wh-fronting, as shown in (1b):