Romeyka is the last surviving variety of Greek spoken in north-eastern Turkey, in the area traditionally known as Pontus (Parcharidis 1880, Deffner 1878, Mackridge 1987, 1995, Sitaridou 2014).

Islamisation of Greek speakers in the areas of Of, Sürmene, Rize, and Matsouka, is reported to have happened in the 15th-18th centuries (Vryonis 1986). However, it is not clear how many of them were assimilated native Caucasians or Turks entering Pontus together with the Ottomans from 1460 onwards, who adopted Greek. The Exchange of Populations between Greece and Turkey, which occurred under the Treaty of Lausanne in 1923, saw all Orthodox Christians of Asia Minor relocate to Greece and all Muslims of Greece relocate to Turkey.

With religion as the defining criterion, Greek-speaking Muslims were allowed to stay in their Asia Minor homeland, but Greek-speaking Christians had to leave Pontus, thereby explaining why Greek survives only in small enclaves in this area.

Where is it spoken today? 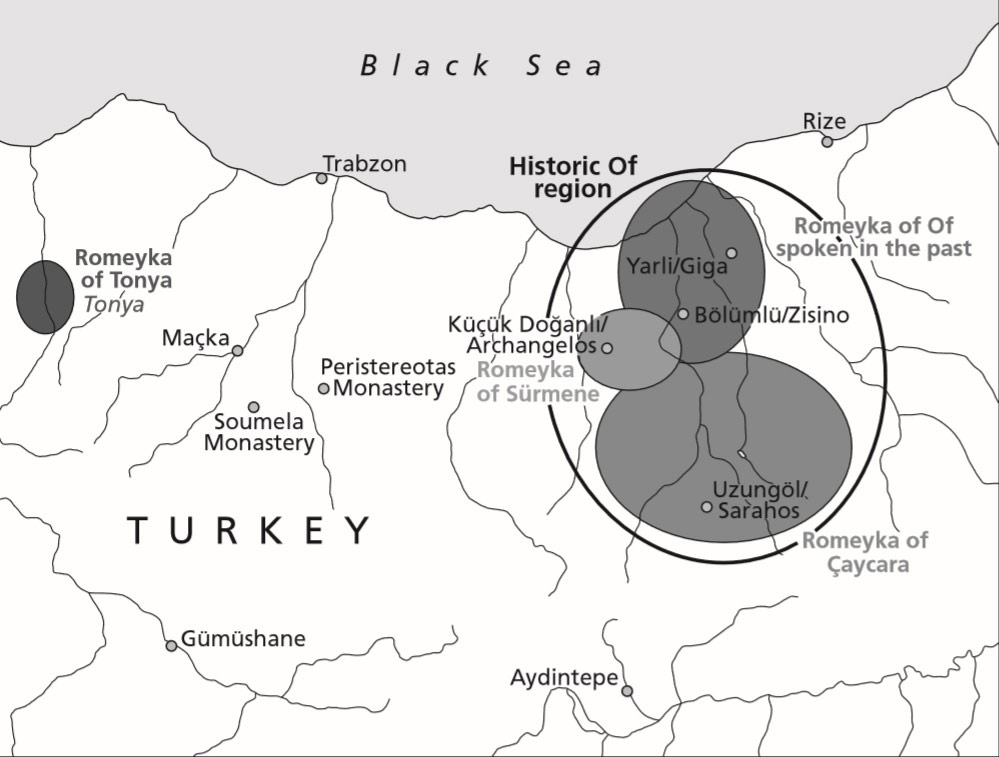 Although Mackridge (1987) uses the term ‘Muslim Pontic’ for the same varieties we document, we prefer to use the term /roméika/, which is what the majority of speakers themselves use to refer to their language (some speakers may also use /romáika/ or even /rumáika/). The same speakers also refer to their variety as ‘Rumca’ when speak in Turkish and therefore, for us, this is also an acceptable term. It would be outside current academic practice to use a term that speakers themselves do not identify with.

However, the term /roméika/ (however spelled) was commonly used in colloquial Greek to refer to vernacular Modern Greek up to the 20th century; furthermore, the term does not adequately distinguish between /roméika/ in Pontus today and Greek varieties today spoken in other areas around the Black Sea (e.g. in Sochum) or Istanbul, all of which are also known as /roméika/. For these reasons we spell /roméika/ in English as ‘Romeyka’ and not as ‘Romeic/Romeika’.

In a similar vein, we spell Romeyka in Greek as ρομέικα and not as ρωμαίικα – especially because the latter would unwittingly associate Romeyka speakers to a concept of ‘Greekness’. Thus, when we spell Romeyka/ρομέικα we uniquely refer to the varieties of Pontus as spoken today by Muslim speakers. When there is further need to specify as to which variety of Romeyka we are referring (because for instance, a certain phenomenon is found in one but not all Romeyka varieties), then Romeyka is followed by the location in which it is spoken (e.g. Romeyka of Tonya, Romeyka of Of (Çaykara), Romeyka of Sürmene).

On the genetic classification of Romeyka

From a genetic point of view, Romeyka belongs to the Pontic group, which, along with Cappadocian, is found at the core of the Asian Minor Greek group (Drettas 1999, Horrocks 2010, Kontossopoulos 1981). According to Sitaridou (2014), Romeika in Pontus  was already a very conservative variety of Greek prior to islamization. When islamisation took place, the Romeika of Muslim speakers was isolated from both: (i) other varieties of (post-)medieval vernacular Greek and (ii) the Romeika of Christian speakers (which, post-Lausanne, started to be referred to as ‘Pontic Greek’) and which has since aligned, to some extent, to Modern Greek.

Urgency of the Romeyka documentation

Although Mackridge discussed the Pontic infinitive, which he has described as the Holy Grail of Pontic Greek studies, the very existence of the Romeyka infinitive as a productive category has been met with great scepticism, since it was claimed that the infinitive had been lost from Pontic Greek long before the ‘exodus’ from Pontus (Tombaidis 1977 [1996]; Joseph 1985; even recently, see Kavčič 2005: 11).

However, Mackridge’s work was nothing less than visionary and inspirational.

When Ioanna Sitaridou gave an invited talk on medieval inflected and personal infinitives in Spanish and Portuguese at the University of Oxford in January 2006, Peter Mackridge was in the audience and it occurred to him that she might be interested in investigating the use of the infinitive in Romeyka today.

The academic results of this encounter can be seen here.